Are churches of Christ in trouble over the Holy Spirit?  Have we sunk to the level of Jehovah's Witnesses; they having disdained one of the Trinity, and we another?

The church in which I recently fellowshiped shocked me when the founding evangelist, home for a visit, announced that he did not believe in the indwelling of the Spirit.  Then the current preacher announced that he concurred.  Then I realized that, among the major Biblical themes that never surfaced in his preaching, was the Holy Spirit.

After four years, with no shared experience in the fellowship, my own relationship with the Spirit had begun to weaken.  With the revelations above, I sensed that He was about to be taken from me and snuffed altogether.  I revolted!  As I began to reflect, I realized the seriousness of the omission.

This is a heresy; a destructive opinion that (I believe) infects a tiny portion of churches of Christ.  I had never heard the indwelling denied outright and altogether.  My experience has been that our Restorationist people generally and traditionally believe in the "non-miraculous" (= "ordinary measure" in some discussions) indwelling of God's Spirit in a baptized believer.

I had heard previously of some who believe the Spirit indwells us "only through the Word."  Having never encountered the view across fellowship in many locations, I have never engaged it meaningfully.  Now, I recognize this also as a heresy, the equivalent of an outright denial.  "Only through the Word" essentially makes a double claim:
--the Word of God (actually) indwells me
--the Spirit of God (actually) does not

Heresy?  A "salvation issue"?  Those in the church mentioned above felt that their view and mine were compatable, rhetorical equivalents whose only quibble was the kind of indwelling involved.  Meanwhile the essential incompatabilty was demonstrated by efforts to silence me in the church.  I was labeled "divisive" only for insisting on traditional, Biblical views on the Spirit.  The elders supported the heresy although I tried for months to get them to "act like elders" and rid the church of the heresy.

Searching for fellowship with like-minded believers led me to Francis Chan.  I was as positively shocked by what I found him to say as I was negatively by the heretical preachers in my church!  Chan preaches the essence of Acts 2:38 more effectively than many in churches of Christ!  He believes in the Spirit, in power, without the excess of Pentecostalism.  I have since enjoyed many of his audio and video sermons on-line and have read his book, "Forgotten God:  Reversing Our Tragic Neglect of the Holy Spirit."

Remarkably, Chan is not an insider to the Restoration movement, not a member of "churches of Christ."  At least not formally.  He is, however, the sort of "back-to-the-Bible" spirit that our founding fathers would have joyfully enjoined in unity.  I sense a profound unity with Chan that I do not sense with my most recent "church of Christ" fellowship (which I have left).  Also, Chan would seem to indicate that ours is not the only fellowship that has drifted away from the Spirit...

So, I began putting the foundations of my own beliefs to writing, including my reasoning why outright disdain of the indwelling Spirit, along with "only through the Word" limitations, should be regarded as heresy.  My hope is that churches of Christ will return to God on this critical aspect of spirituality.  The result is a number of chapters that I hope to collect, edit further, and publish as a book.  The chapters are offered here for comments and critiques that might sharpen my focus and thus improve the writing.

It gives me some pause that I seem to be the first to designate this a heresy.  Having been hit with it as I was, I am sure that this is right.  I hope others will come to view it the same way, to the glory of God and the betterment of our churches.

Servant of Jesus,
John
Posted by John at 4:17 AM No comments:

"What Is A Christian?" book 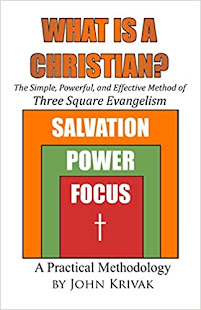 John
Interested in covenant relationships, both Christian and marriage. Father and grandfather.